As you probably know some of the islands in the Philippines were recently wiped out by a typhoon in April. See below article snippet. Through various humanitarian efforts schools are being rebuilt so children can get back to school. However, my friend Andy Trish recently travelled to the Philippines and […]

Comcast announced it has surpassed one million Wi-Fi hotspots across the nation, according to a press release that the company recently issued. How did they do that? Outdoor Hotspots: Comcast has placed Xfinity WiFi hotspots in public locations across the country, ranging from shopping centers and commuter stations to parks, […] 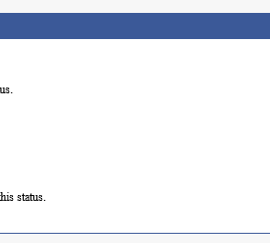 This arrived in a friends email today. It looks just like a message from Facebook but it isn’t. How do you know? Hover your mouse and wait a second for the pop-up to appear that tells you where you are going to go if you click. Above I hovered my […]

Introducing Parrish Todd. By now I think that most everyone has met Parrish and you’ve provided favorable reviews of his work thus far. Soon we’ll begin assigning Parrish to accounts so he can become a select groups “IT guy”. Parrish comes to us with 13 years experience in a wide […]

We have seen a rash of websites attacked and essentially destroyed recently. The attack is poorly executed and fills the website with enough garbage to cause it to be unable to run. The sheer number of files that are placed in the folders and the code changes make it impossible […]

Gosh it’s been an interesting week. We received notification that APC has recalled some very old surge strips. These were manufactured prior to 2003. If you have one of them around they are a fire risk. Below is a picture of what they look like. If you have one of […]

Cryptolocker: Regarding yesterday’s post about Cryptolocker. We are working on developing a block for the installer of this virus. Currently we are testing it on our own computers. This block uses software restriction policies to prevent the executable files from running. We are testing (dogfooding) on ourselves to make sure […]

We have noticed that Comcast Business is now offering higher speeds for the same price. You might be able to get them to increase your speed. This is what new customers are getting. However Comcast has no plans to increase the speed of existing customers. This means that you will […]

Harbor has had a Facebook page for quite some time. If you aren’t connected to us over there I would encourage you to do so if you are interested in what’s going on in the computer industry and with Harbor. Our blog is also syndicated to Facebook too. Here are […]

Over the last week Comcast has had reliability issues that have caused several of our clients to have intermittent issues. Through our efforts to represent our clients Comcast finally admitted to a serious internal problem. They made some temporary changes and these changes seem to have effected their internal phone […]